A train derailment near Pendleton, Oregon resulted in the release of 10,000 gallons of toluene in a farmer’s field within a few hundred feet of the Umatilla River. CRETE principals responded to the spill as part of an organized spill response program.

Due to salvage and mainline restoration activities, initial cleanup activities included interceptor trenches and limited pumping to prevent discharges to the river. Shortly thereafter, air sparging systems were installed in the open trenches to encourage soil and groundwater treatment. After initial response efforts, the air sparging groundwater treatment system was converted to a well point system to address impacts downgradient of the excavated source area.

The Umatilla River is designated as a “wild and scenic river” and fish populations were being reestablished by a joint effort of farmers (reducing irrigation water extraction), the Umatilla Indian Tribe, and various state agencies. In the two weeks leading up to the spill, about 2,000,000 smolt had been released to the river. Recognizing these issues, an aquatic biologist was flown to the site, where they coordinated daily meetings with the Department of Fish and Wildlife, the Umatilla Indian Tribe, the EPA and other interested parties, and allowed these parties limited access to the site.

The site was cleaned up within 8 months and delisted within 2 years. Costs were reduced by avoiding claims and fines, limiting long-term operations and monitoring of remediation systems, and by managing the excavated source area soil “on site.” Total costs savings were in excess of $3 million. 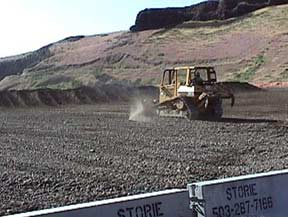 This entry was posted in Design & Cleanup, Projects, Site Assessment. Bookmark the permalink.