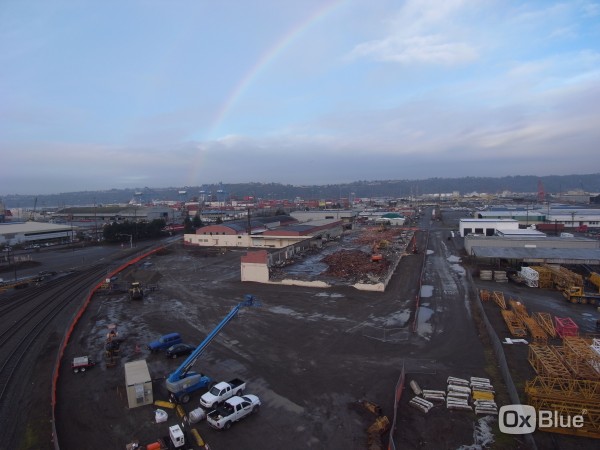 CRETE prepared a cleanup plan, construction drawings and specifications, and provided construction oversight for the demolition of an 117,000-square foot warehouse located near the head of the Sitcum Waterway in Tacoma, Washington. The site has had a variety of manufacturing uses which resulted in volatile organic compound (VOC) contamination in the soil and groundwater beneath the building. The building materials include interior and exterior PCB-containing paint and caulk. PCBs leached from the paint and caulk into the adjoining building material (concrete) and also migrated into the shallow soil adjacent to the building. CRETE worked with the Port of Tacoma to develop a strategy to segregate PCB-impacted materials from other building materials during building demolition to reduce disposal cost and avoid generating PCB Remediation Waste. PCBs in the building materials and surrounding soil trigger EPA TSCA and Washington State Dangerous Waste Regulations.

A fully-contained pilot abrasive blasting test was performed to evaluate the removal of paint with TSCA-level PCBs from building material surfaces. The results of the pilot testing determined that abrasive blasting technologies could not adequately remove TSCA-level PCB contaminated paint from building materials. As a result, the cleanup action used existing data to delineate TSCA level soil which eliminated the need to sampling during construction. In addition, the cleanup action utilized the 2013 TSCA reinterpretation to profile demolition wastes as PCB Bulk Product Waste, regardless of PCB concentrations. This pre-characterization of the demolition waste as suitable for Subtitle D landfill disposal eliminated the need for Subtitle C disposal and sampling during construction.

Building demolition and PCB soil cleanup were performed in late 2014 and early 2015 and the Port is currently using the site for truck queueing.

CRETE is continuing to support the Port through oversight of remedial investigation and feasibility study work being performed by a previous site operator under the MTCA VCP program. Soil and groundwater contamination with solvents and metals resulted from previous electroplating operations. This contamination has triggered an evaluation of indoor air quality and potential discharge of groundwater contamination to the Sitcum Waterway. In addition to the MTCA RI/FS support, CRETE is also supporting insurance and PLP cost recovery.

This entry was posted in Design & Cleanup, Projects, Site Assessment. Bookmark the permalink.